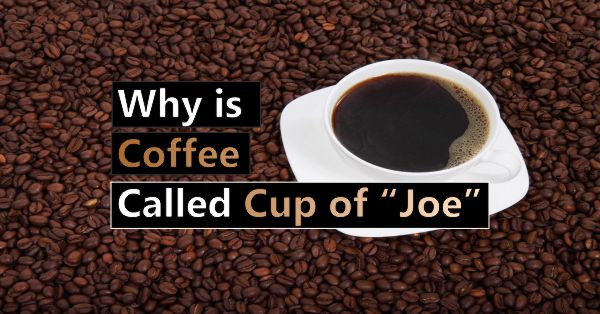 Why is Coffee Called “Joe”

Millions of people all over the world love to drink coffee. People love it so much that they have given it many cute names. Among the many names for coffee, “Java” and “cup of joe” are the most popular.

Where did all these creative names for coffee come from, and why is coffee called joe?

This common nickname has existed for a long time, but no one knows where it came from. There have been a lot of ideas about what happened, and none of them can assume to be the honest answer.

“Cup of Joe” is a phrase most Americans, especially coffee drinkers, use often. There are a lot of different ideas about where the name came from, and they all go back to various periods in history.

We’ll talk about all these thoughts, and you can choose which one you think is true.

5 Thoughts About Why is Coffee called “Joe”

Popular belief holds that the first explanation is where this expression came from. In 1914, then-Secretary of the Navy Josephus Daniels forbade his crew from consuming alcoholic beverages. So, the sailors started consuming coffee at an unprecedented rate.

They all started referring to their morning coffee as “cups of Joe.” to mock their boss’s choice. When the sailors returned to port, the phrase supposedly acquired widespread usage.

Several factors, however, cast doubt on this thought. It was already challenging to procure alcohol on military ships, so it’s unlikely that the embargo affected Josephus Daniel’s men.

Furthermore, this event happened in 1914, although “cup of Joe” did not enter general usage until the 1930s. In 1931, a Reserve Officer’s Manual was the first place the phrase appeared.

The second hypothesis is that because coffee has become so widespread, it has acquired a generic term. Regular use of coffee increased throughout the 1930s and 1940s when more and more service members began to make it part of their daily routine.

The term “G.I. Joe” was widely used since many men served in the armed forces. As a result, “cup of Joe” may be code for a drink associated with the working class.

Since most coffee drinkers fall into the middle class, it seems fitting to give the beverage a name that would be familiar to the typical working stiff.

Additionally, it wasn’t until roughly 1930 that the phrase “cup of joe” entered the English language, according to historians. Linguists believe it was created at that time as a perversion of another famous moniker of the time, jamoke.

Jamoke was derived from the two namesake Java and Mocha. Experts speculate that jamoke became joe over time, as it is common for slang terms to be shortened as time passes.

Also Read: How Many Ounces in a Cup of Coffee?

The expression “cup of Joe” was initially registered as a trademark by the Martinson Coffee Company. However, it is unknown who first said the phrase. In the year 1898, Joe Martinson established his business in the city of New York.

People in the neighborhood who bought his coffee frequently referred to it as “Joe’s coffee” or “cups of Joe.” It is not hard to assume that such a large city as New York may have been the origin of the phrase.

The phrase might have been disseminated this way due to the high number of people traveling to and from New York.

Cup of joe is a trademarked term owned by Martinson Coffee, indicating that the slang term dates back to the company’s inception.

Locals may have referred to Joe’s coffee as a “cup of joe” when it was first introduced in New York in 1898 by Joe Martinson, who was said to have a “bigger-than-life personality.”

The phrase might have become more than just a regional expression by the 1930s, thanks to the company’s expansion.

Why is Coffee called Joe in America

Some have speculated that using “your average male American name” for coffee results from a long-running prank started by irate WWI sailors.

According to legend, a rigorous secretary in the American Navy by the name of Joseph Daniels tried to put a stop to all the partying that was taking place at that time.

Sailors began referring to their morning brew as “a cup of Joseph Daniels” as a mock salute. Still, since publicly disparaging a superior (in this case, significantly superior) officer is taboo in the Navy, the term was abbreviated to “a cup of Joe.”

It’s a beautiful narrative, but consumers must question whether it’s true.

What About Other Slang Phrases for Coffee?

This way, you can see that “coffee” has several different meanings. You may never know where some slang names came from but still think of their fantastic ways to refer to your favorite drink.

The list of names for caffeine-containing beverages is long and varied. Some examples you came up with include Brain Juice, Bean Juice, Battery Acid, Brewtus, Caffeine Fix, Caffeine Infusion, Cup of Jolt, Mocha, Cup of Brew, and countless others.

When coffee is excellent, then why is it called “Java”?

Java’s tropical warmth and location made it ideal for transplanting coffee trees by the Dutch, who colonized the island in the seventeenth century.

Due to the widespread nature of the Dutch trading empire and the growing popularity of coffee in Europe, the term “java” was eventually adopted as a synonym for coffee.

What does “Jamocha” Mean?

Jamocha refers to the popular beverage made by combining coffee and chocolate. It was named after two of the most well-known coffee-growing areas, Java and Mocha.

The Dutch established extensive coffee plantations on the Indonesian island of Java. Mocha, located on the Red Sea, is where some of the world’s best coffee was sent from the Arabian Peninsula.

They came together to form the word “Jamocha,” which is now most often associated with frozen desserts made with coffee and chocolate.

Conclusion- Why is Coffee Called Joe

You might still be perplexed as to why some people request “just a cup of Joe” despite the abundance of possible explanations. At least you have some entertaining tales to tell the Joes at the bars now.

Just keep in mind that the expression “a cup of joe” originated in one of the following positions:

Once all the ideas have been heard, some stand out as more plausible than others. But whatever its origin, the phrase has persisted in usage for decades and will continue.

Perhaps elements of truth can be found in each possible theory, or perhaps none are correct. Perhaps this is a dispute better kept inside the confines of a close group of friends.

Also Read: How to Make Turkish Coffee the Right Way