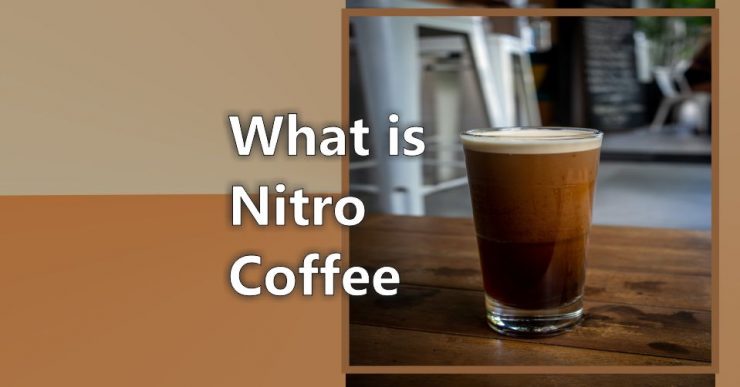 What is Nitro Coffee? How to Make it at Home

Any company, store, or roaster that you even glance at will have talked about nitro coffee at one point or another. Many people are talking about “nitro coffee” in the coffee industry, and people all over the United States are excited to try this tasty and unique drink.

Nitro coffee is a type of coffee getting a lot of attention recently. You likely want to know how to make it at home if you’ve tried it before. You can make your nitro coffee at home with this recipe. We’ll go over what it is and how it works below. Let’s start now.

What is Nitro Brew Coffee?

The cold brew coffee is used to make nitro coffee, nitrogen gas is employed to flavor the beverage. Because of the addition of nitrogen gas, which is also found in beer styles such as porters and stouts, coffee acquires a thick and creamy texture. Additionally, the nitrogen contributes to forming a thick foamy cap, much like the one found on a beer.

Additionally, nitrogen aids in reducing some of the coffee’s bitterness and acidity, making it more appealing to non-coffee consumers.

What was the Origin of Nitro Coffee?

In 2012, experimental baristas at Cuvee Coffee in Austin, Texas, came up with the idea of making nitro coffee. The popularity of nitro coffee has spread across the country, and you can now buy it at select grocery stores and convenience stores.

How to Make Homemade Nitro Coffee

If you have the proper equipment, making nitro coffee at home isn’t as difficult as you would think. Since cold brew is generally used to make nitro coffee, we’ve included step-by-step instructions for making cold brew in this recipe.

In a big mason jar or carafe, combine coffee grinds and water. To guarantee that all of the coffee grounds are in contact with the water, you should stir the mixture thoroughly. Allow the mixture to settle at room temperature for 18-24 hours.

Pour the mixture of the coffee and liquid mixture through a fine sieve into an empty, clean glass container or carafe. Dispose of any ground that has been captured.

3. Filter your Cold Brew with Paper

After you’ve cleaned the carafe or glass jar, lay a pour-over funnel and filter on top of it. Using a paper filter, pour the freshly brewed coffee into a new container and discard any remaining tiny grounds.

The number of coffee grounds that are being filtered out may need the use of a second paper filter. The old filter should be thrown out (s).

4. Keep your Coffee in the Fridge

Place your thoroughly filtered cold brew in the refrigerator and allow it to sit until it reaches the temperature you prefer to consume it.

Fill your cream whipper with cold brew and turn it on. Close and tighten the whipper’s lid after inserting a nitrogen cartridge.

Pull the trigger and hold it until the nitrogen-infused coffee is dispensed into your drink.

Is it Safe to Drink Nitrogen-Infused Coffee?

For centuries, beverages have contained nitrogen gas. It’s the same thing in some beers. It is a safe substitute for carbon dioxide. Most drinks include carbon dioxide, producing more excellent soda and ordinary beer bubbles. When poured into a liquid, nitrogen responds differently.

And nitro coffee looks excellent in a glass. It’s not dissimilar to nitro beer. Both have a deep color, a foamy head, and bubbles streaming down the glass. A nitro brew coffee’s aesthetic beauty is part of the total experience. It’s beautiful and delicious. It’s an Instagram-worthy drink that tastes even better.

Is Nitrogen-Infused Coffee Beneficial to Your Health?

As an alternative to your typical caffeine hit, nitrogen coffees are becoming increasingly popular. Several factors contribute to its status as a healthy coffee beverage, the most notable of which are:

You don’t need to add milk or sugar since nitrogen enhances the flavor and makes the coffee creamy and sweet. Because of this, it is ideal for calorie-conscious caffeine addicts. Due to the creaminess, it appeals to those who are lactose intolerant or otherwise have a sensitivity to milk.

Nitrogen coffee, an icy brew, has another benefit. Because the coffee is soaked slowly in cold water, less acidity is extracted from the bean in cold brew.

This results in a more prosperous, less acidic cup of coffee than you’d get by brewing it the old-fashioned way. Because of the lesser acidity in the final cup of nitro brew, coffee enthusiasts are less likely to suffer from stomach cramps.

The amount of caffeine in a cold brew compared to a regular cup of coffee is significantly higher. Coffee beans retain more caffeine when they’ve been brewed for longer, which reduces acidity.

So, if you have caffeine sensitivity, observe how much you take in. However, nitro brew coffee may be good if you try to limit your intake. You won’t need to drink as much coffee to receive the same amount of energy boost from green tea.

Nitro coffee is becoming increasingly popular because of its health benefits and appeals to customers. There are several reasons why this caffeinated brew is so popular.

Is There More Caffeine in Nitro Coffee?

Nitro coffee provides roughly 30% more caffeine than conventional drip coffee, making it a better choice for caffeine. Some scientists have also proposed nitrogen gas to speed up the caffeine’s absorption into the body.

Also Read: What Coffee Has the Most Caffeine?