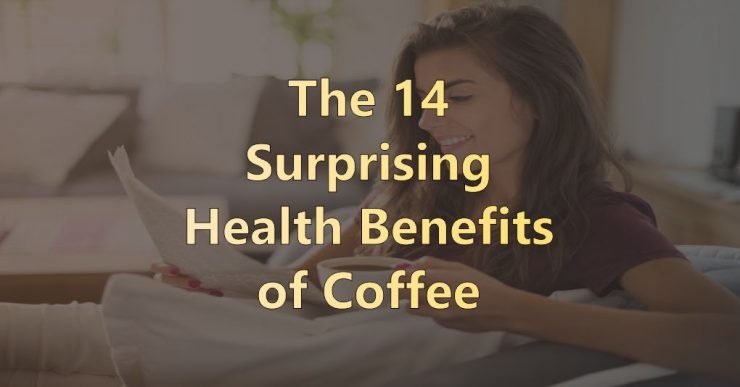 The 14 Surprising Health Benefits of Coffee

The most common perception of coffee is that it provides a quick energy boost. However, other studies suggest that it may have additional health benefits. It may also reduce the risk of liver cancer, type 2 diabetes, and cardiovascular disease.

According to current estimates, approximately 2.25 billion cups of coffee are consumed each day worldwide. People with diabetes, cardiovascular disease, gastrointestinal disorders (GID), and liver illness have benefited from drinking coffee.

Riboflavin, niacin, magnesium, potassium, and phenolic chemicals (antioxidants) are only some of the nutrients found in coffee. These and other components in coffee, according to some researchers, may provide a variety of health benefits.

In this post, we’ll examine the potential health advantages, evidence for those benefits, and hazards of coffee consumption.

Also Read: 9 Rules for How To Make a Perfect Cup of Coffee

Type 2 diabetes, Parkinson’s disease, liver disease, and liver cancer are just a few of the conditions that drinking coffee may help prevent. A cup of joe a day may help keep your heart healthy.

More information on these and other advantages can be found in the following sections.

1. Coffee may Decrease your Risk of Type 2 Diabetes.

According to numerous studies, drinking coffee may reduce developing type 2 diabetes. According to a recent study, coffee consumption habits may also play a role. Over four years, researchers tracked the consumption of caffeinated coffee.

More than one cup of coffee a day was associated with an 11% decreased chance of developing type 2 diabetes. People who cut back on their coffee use by more than one cup a day elevated their risk by 17 percent. Just keep an eye on the amount of cream and sugar you use.

2. Coffee may Protect Against Parkinson’s Disease.

Parkinson’s disease is less common among people who drink caffeinated coffee, according to research (PD). Currently, scientists are looking at whether or not your genes play a role. According to a groundbreaking study, coffee users had a 27% decreased risk of Parkinson’s disease.

There was a 59% reduction in mortality risk for people who consumed a lot of coffee and had a certain gene mutation. This has interesting implications for treating the disease and tailoring treatment to your genetic structure.

In addition to cleaning down waste and converting food into energy storage, the liver also produces blood cells. The liver is located in the right upper belly and is an extremely important organ. Cirrhosis can arise from a scarred liver caused by a high-fat diet or excessive alcohol consumption.

In persons who drink 4 or more cups of coffee a day, the risk of cirrhosis is reduced by up to 80%. The risk of liver cancer is also reduced.

The focus here is not on inflammation generated by an intense workout but rather the inflammation caused and exacerbated by old age. Nearly all of the other health benefits listed below could be attributed to caffeine’s capacity to fight and ward against disease.

Caffeine, which gives coffee its stimulating “wake-up” effect, works by blocking certain receptors on brain cells. According to the study, caffeine also suppresses the production of inflammatory chemicals by obstructing these receptors. So, don’t be afraid of a cup of coffee as you become older.

Caffeine-drinking older adults had lower levels of inflammatory chemicals, lower blood pressure, and more flexible arteries, as well as more relatives who lived to be 90 or older, according to this study.

5. Coffee may Lower your Risk of Depression and Suicide.

Coffee consumption in the range of 2 to 3 cups a day may also positively affect your mental health. According to Harvard researchers, males and females who drank coffee had a 50% decreased risk of taking their own lives.

According to scientists, coffee is thought to impact the neurochemicals that play a role in depression positively.

6. Powers You Through Your Workouts.

Fitness is an essential element of a healthy lifestyle, and you probably already know this. And odds are, if you’re here, you enjoy your morning cup of joe just as much (if not more) than you want your workout.

As if that weren’t enough, a cup of coffee can assist you in achieving your fitness goals.

In a study published in the Journal of Sports Medicine, researchers showed that low amounts of caffeine (or less than 200mg) before exercise could enhance short-term high-intensity effectiveness. Caffeine has improved endurance performance in training at very low or very low levels.

As a result, you can skip the pre-workout caffeine crash. However, the health benefits of a regular cup of coffee can’t be overstated, especially when it comes to working out.

7. Coffee Can Help Protect you from Dementia and Alzheimer’s Disease.

Both Alzheimer’s disease and dementia are neurodegenerative diseases that affect the elderly, and there is currently no known cure for either.

However, there are measures you may take to protect yourself or, at the very least, delay its development. One way to lower your risk of developing these diseases is to drink a cup of coffee every day.

We all need a little caffeine to get us through the day, and that’s why we drink coffee. Caffeine can be harmful in high doses, but it can also benefit in little quantities.

In the groggy-morning state, caffeine provides tremendous short-term benefits, which is why people gravitate toward it.

Young adults who drank caffeine in the early morning had a better memory than those who drank it at other times of the day. There are many health benefits of drinking coffee, including a rise in cognitive performance over time.

In a study published in Practical Neurology, coffee drinking has been linked to a lower risk of cognitive deterioration. Stroke, Alzheimer’s, and Parkinson’s disease are all reduced as a result.

A good diet and a regular cup of coffee can help you stay more focused, improve your memory, and improve your brain health in the long run.

Studies have shown that drinking coffee can provide some of the vitamins you need to maintain a healthy lifestyle. Vitamin B12, vitamin B3, and vitamin B5 are all included.

Besides iron, manganese and potassium can be found in coffee. Bone and tissue health is supported by the former, while cardiovascular health is improved by the latter.

Defending yourself from oxidative damage and cancer is a major benefit of taking antioxidants. When you hear the word “antioxidant,” you might picture dark green vegetables or brightly colored fruits. However, these aren’t the only meals rich in these vitamins and minerals.

Coffee is a great source of antioxidants, one of the many health benefits of drinking it. You get a flood of these protecting chemicals from just one cup every day.

The antioxidant content of naturally roasted coffee is on par with that of green tea, according to a study published in 2013.

When it comes to obtaining enough fruits and vegetables in your diet, you don’t have to worry too much about it. When it comes to getting your recommended daily allowance of antioxidants, your coffee habit may be assisting you.

According to an analysis in Circulation, 3 to 5 cups of coffee a day appears to be the most beneficial. Even if you don’t suffer from high blood pressure, you may benefit from drinking a cup of coffee every day.

The American Heart Association reported that drinking coffee was connected with decreased heart failure and stroke risk by 8%, adds Nieves.

Finally, the American Heart Association states that drinking coffee may help lessen the chance of atrial fibrillation, resulting in a stroke.

According to a 2018 study in JACC: Clinical Electrophysiology, regular consumption of up to 300 mg of coffee a day may protect against cardiac rhythm problems.

12. Coffee May Enhance your Focus.

Caffeine is beneficial for both basic and difficult tasks requiring concentration and alertness. Researchers found that a small study published in Consciousness and Cognition in March 2020 suggests a link between coffee consumption and improved focus, but not creativity.

A small sample of 80 participants received either a caffeine pill containing 200 milligrams (the equivalent of one cup of coffee) or a placebo.

A review of the effects on problem-solving, idea generation, and working memory indicated that caffeine positively impacted the researchers’ problem-solving abilities. Larger populations would be required to investigate these effects.

13. Helps You Maintain a Healthy Weight.

Coffee and weight loss are contentious subjects. Suppose you’re trying to maintain a healthy weight while simultaneously enjoying a cup of coffee. In that case, you might be interested to see what the scientific community has to say about the topic.

We’re happy to report some wonderful news. Drinking coffee can help you lose weight and keep it off by increasing your metabolism.

Research from Harvard T.H. Chan School of Public Health shows that caffeine use may assist in your quest to lose weight. 4 cups of coffee daily lowered body fat by roughly 4 %, according to this study.

According to one study, women who drink coffee have a 25% lower stroke risk than women who don’t. Extensive research conducted in Japan indicated that coffee consumption decreased the incidence of stroke in both men and women.

How Much Coffee should you Drink?

Now that you know the benefits of coffee, you may wonder how much you should drink every day. The FDA recommends no more than 400 mg of caffeine per day or 3 to 5 cups.

“Many research shows that moderate intake is the benefit limit,” Hultin says. The March of Dimes advises pregnant women to consume no more than 200 mg each day.

Be aware, however, that some coffees served in restaurants are higher in caffeine than the average cup. According to the Caffeine Informer, an 8-ounce tall Starbucks Reserve Roast has 190 mg of caffeine, while a 16-ounce grande has almost as much as the daily limit.

Cautions for too much caffeine “Caffeine intake of more than 5 cups per day has been demonstrated to cause issues,” adds Hollifield.

“Too much caffeine can cause anxiety, heart palpitations, nausea, and even hypertension. Caffeine affects everyone differently based on genetics and how the body metabolizes it.”

If you don’t already drink coffee, you don’t have to start now. “You don’t need coffee to be healthy,” Hultin argues. “Antioxidants are an intriguing benefit.

Drinking tea or eating fruits and vegetables provides them. Whole foods are crucial for their vitamins, nutrients, and antioxidants. Health is a huge picture.”

Coffee is an unusual hero because of the health benefits it provides. It’s packed with antioxidants. It can keep a healthy weight while protecting your liver, fueling your exercises, and improving your mental performance and memory.

Most of us would never have imagined that the coffee habit might have many advantages. The research, on the other hand, indicates otherwise.

Of course, consuming enormous quantities of anything is detrimental to one’s health. However, drinking a reasonable amount of coffee can improve your overall well-being and help you become a happier and healthier person.