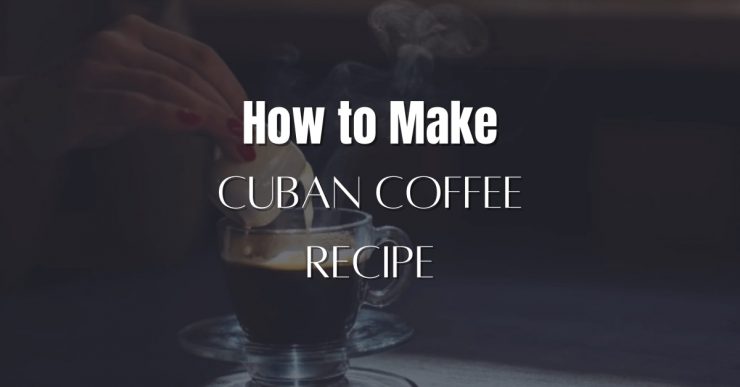 The sweetness, richness, and delectability of Cuban Coffee are incomparable. If you have it with loved ones, but no need for dessert since it’s traditionally offered after dinner. Espresso shots with a thick coating of foamy crema require a specific method.

The crema is made with sugar instead of milk, unlike other espresso drinks, and you don’t need an expensive espresso machine to produce it.

A 6 or 9-cup stovetop espresso machine or Moka pot works well for making Cuban Coffee. Coffee is simple to make, and true Cuban Coffee is made with fine-ground beans. The same results can be obtained using freshly ground coffee beans.

It takes practice to turn sugar into the ideal crema. First, use the first spoonful or so of brewed Coffee. It’s concentrated and nearly like coffee sludge, perfect for making espuma with sugar (or espumita).

Beat the mixture for a few minutes to acquire the required consistency. It takes time and effort, but the result is worth it.

What is Cuban Coffee?

In Cuba, Coffee made with whipped sugar and black Coffee or espresso is Cuban Coffee (or Cafe Cubano). In order to achieve the thick, foamy crema layer, the whipped sugar comes out on top.

This “espuma” layer is made from whipped sugar, and it’s incredibly simple and tasty. When brewing the Coffee, it’s better to use a Moka pot.

How to use a Moka pot to produce delightfully sweet Cuban Coffee at home.

The following items are required:

Preparing the Moka pot of Coffee

The final result will necessitate at least two shots of Coffee. By using 3-cups of Moka pot, it makes 2-3 shots.

Place Cuban coffee grinds in the Moka pot and bring to a boil. Please don’t mess with it. With a finger, make a mark where you want the level to be.

Add hot water to the bottom reservoir until the pressure release valve is just below it.

Start by heating the Moka pot at a low temperature.
After the Coffee has been brewed, please remove it from the heat immediately.

Start by adding 4 tbsp. of sugar to a mixing bowl. (For more foam, add extra sugar.

As soon as your Coffee is ready, take 1 tbsp of it and mix it with sugar in a bowl.

Whip the sugar and Coffee for 2 to 3 minutes, until frothy and creamy using an electric mixer. If necessary, make an additional serving of Coffee to satisfy your craving.

It’s important to mix everything well so that sugar dissolves and the espuma layer forms on top. Serve immediately in espresso or demitasse cups.

Recipe Notes: A thicker layer of foam (espuma) will be created by adding more sugar. Traditional dishes can require as much as a spoonful of sugar each serving.

Also Read: How To Make Iced Coffee With Keurig

A step-by-step guide to creating it

Start by gathering all of the necessary ingredients.

Use fine-ground Coffee in a big stovetop espresso maker and brew according to the manufacturer’s instructions.

Add the sugar to a glass measuring cup with a minimum capacity of 2 cups. Add one spoonful of sugar to the Coffee after a few sips have been made.

Keep a tiny amount of extra coffee concentration in a dish in case you run out. Re-heat the pot to complete the brewing process.

Make the espuma by quickly beating the sugar and espresso with a small whip or spoon for 2 to 3 minutes, until it is a light brown, almost frothy paste. It’s impossible to overdo it when it comes to beating it.

Pour the Coffee over the espuma while swirling to combine. The foamy crema can now be allowed to rise to the surface.

Pour the espresso into small demitasse cups. Pour the cream into each cup using a spoon and a little shaking of the measuring cup.

Enjoy your meal after you’ve served it.

Prepare the espresso by brewing the Coffee. Follow the manufacturer’s instructions for how much water and ground espresso to use in your espresso maker. Brew the espresso in a medium saucepan over medium heat.

Add sugar to a small cup or creamer cup. Pour the next few drops of espresso into the sugar cup. The initial few droplets of espresso are generally the most concentrated.

Let the espresso maker brew while you produce the sugar foam. Make a pale, thick sugar froth using the sugar and espresso (espumita). There will be some trial and error if this is your first time.

Add a small amount at a time, stirring until thick but drippy. Track your additions to determine how much to put next time.

Espresso and sugar foam should be combined. Put the freshly made espresso in the cup and top it up with whipped cream. To blend, slowly stir both ingredients together. Use these espresso mugs to serve your guests.

Despite the arrival of the coffee plant in Cuba in 1748. The country did not develop a significant industry growth until the 1790s when the government came under more French influence due to the exodus of Haitian creoles following the revolution.

Because both sugar and Coffee were large industries, likely, their union in the renowned café Cubano and its luscious sugar foam had a significant impact.

In the 1940s, Cuba became the world’s largest exporter of Coffee.

A significant decline was precipitated by the Cuban Revolution in 1959, particularly when embargoes imposed by the United States and other nations limited Cuba’s ability to import and export goods.

Following the nationalization of industry, production on the island has dropped dramatically, making for a sadder café Cubano.

Cuban espresso companies like Cafe Bustelo and pilon are still popular among immigrants and their descendants outside of the island nation. However, American multinationals have purchased up most of the original owners of the companies.

However, the dark, robust flavor is retained, making it simple to create a café Cubano.

As with any other coffee culture, Cuban coffee comes in a variety of beloved forms, and while you’re experimenting with this particular drink, it’s worth trying a few of the café Cubano’s variants.

These modifications can be created with a regular espresso maker, but in Cuba, the Moka pot is the only option.

This is Cuba’s most popular coffee drink, consisting of four ounces of coffee mixed with the sugar as mentioned earlier foam, and typically served in containers no larger than an espresso cup.

The brew is robust and sweet enough that 4 oz will satisfy the needs of even the most ardent coffee drinker.

Unsweetened coffee and steamed milk are used to make this popular espresso beverage.

It’s like a macchiato but with a Cuban twist. Dark roasted coffee grounds have a strong flavor, but adding a little cream helps balance it out.

This drink, like the cortadito, is made with steamed milk and unsweetened coffee. However, compared to the cortadito, this version is closer to a cappuccino or café au lait because more milk is used.

While it’s true that many Cubanos like their coffee black, without any added sugar or foam. These drinks have a long history on the island and have been brought by Cubanos wherever they’ve settled.

Be sure you use the correct amount of coffee and water for your espresso maker.

The espuma will first be gritty after whipping it. Keeping continuing will result in a paste that is a bit frothy inconsistency. A thick but not runny sauce should drop from the whisk or spoon, and the sugar should be almost completely dissolved. If necessary, add a second splash of intense espresso.

This recipe uses 1/4 cup of sugar, which works in both 6-cup and 9-cup containers. The increased volume won’t be as tasty as the smaller ones.

It’s possible to use a 3-cup Moka pot, but the coffee will be excessively sweet if you use it. Because 1/4 cup sugar is easier to beat than 1/8 cup, make the larger batch.

Divide the espuma in half or spoon a tablespoon (or to taste) into each cup. Excess espuma should be refrigerated and used daily; let it warm up and whisk once more before adding coffee. It won’t be flawless, but it will taste delicious.

To Make Cuban Coffee, What Kind of Beans Should you Use?

The most traditional coffee from Cuba is a medium-to-dark roast, but any of those would do. Almost every grocery store has Cuban coffee. Cafe Bustelo and Cafe Pilon are only a couple of well-known names in the industry.

What Is the Strength of Cuban Coffee?

A cup of Cuban coffee has 50 mg of caffeine or more, depending on the type of beans, roast, and coffee maker used. This is because Cuban coffee is made with strong coffee sugar. Decaffeinated coffee can be used to make Cuban coffee.

There’s a good reason why the Cafecito or Cuban coffee is a favorite; it’s not your ordinary cup of joe from a coffee shop.

You can enjoy it with various other drinks such as the café con Leche or the cortadito. If you don’t want to ruin the creamy sugar foam, make sure to serve right away.

The best place to get Cuban coffee is at a Cuban café, but it’s simple to prepare it at home as well.

Taken in a small cup and considered a daily pleasure by most Cubans, you can create a Cuban coffee style with the right coffee grounds, the suitable espresso maker, and some practice making the sugar foam that is vital to it.